Andrew and Leona opened their first chocolate and coffee shop in 2012 having decided to change careers and do something completely different- Andrew had been in the City for 23 years and Leona had been a linguist in the Civil Service for even longer.

Having a love of all things chocolate, Leona decided to retrain as a chocolatier and undertook training at the Academy of Chocolate run by Callebaut Chocolate in Banbury, interspersed with long hours practising in her kitchen at home and the arduous task of numerous tasting sessions. Leona has been honing her skills ever since and is now an award winning chocolatier, gaining multiple Academy of Chocolate and Great Taste Awards, both for her filled chocolates and eyecatching packaging for her bars.

Andrew meanwhile became a skilled barista and total coffee nerd, well versed in the complexities of brew ratios and latte art. He is the welcoming face of DeRosier Chocolate & Coffee- so much so that regular customers often refer to our first shop as “Andrew’s”, (Leona wanted to call their shop DeRosier as it was her French Canadian father’s name and seemed to fit the bill as a name for a chocolate company!).

Our chocolate shop in South London… 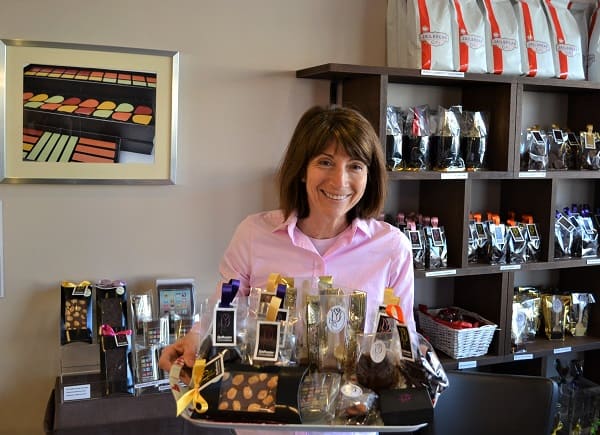 We use cookies on our website to give you the most relevant experience by remembering your preferences and repeat visits. By clicking “Accept All”, you consent to the use of ALL the cookies. However, you may visit "Cookie Settings" to provide a controlled consent.
Cookie SettingsAccept All
Manage consent

This website uses cookies to improve your experience while you navigate through the website. Out of these, the cookies that are categorized as necessary are stored on your browser as they are essential for the working of basic functionalities of the website. We also use third-party cookies that help us analyze and understand how you use this website. These cookies will be stored in your browser only with your consent. You also have the option to opt-out of these cookies. But opting out of some of these cookies may affect your browsing experience.
Necessary Always Enabled
Necessary cookies are absolutely essential for the website to function properly. These cookies ensure basic functionalities and security features of the website, anonymously.
Functional
Functional cookies help to perform certain functionalities like sharing the content of the website on social media platforms, collect feedbacks, and other third-party features.
Performance
Performance cookies are used to understand and analyze the key performance indexes of the website which helps in delivering a better user experience for the visitors.
Analytics
Analytical cookies are used to understand how visitors interact with the website. These cookies help provide information on metrics the number of visitors, bounce rate, traffic source, etc.
Advertisement
Advertisement cookies are used to provide visitors with relevant ads and marketing campaigns. These cookies track visitors across websites and collect information to provide customized ads.
Others
Other uncategorized cookies are those that are being analyzed and have not been classified into a category as yet.
SAVE & ACCEPT
Cart
Checkout - £0.00